A little excursion into number theory for digital artists

Back in the twenty-aughts, I think it was around 2008, I was invited to submit photographs to an exhibit entitled "Numbers."  Based on the works that were selected (none of mine were), the title of the exhibit should have been "Numerals."  Each photograph prominently displayed an Arabic numeral.  (I don't remember there being any Roman numerals, which seems like an obvious omission.)

Upon reading the invitation, I immediately thought of the number zero and submitted this photo:

BlackThis is all black, the color you get when each pixel has zero values for Red, Blue and Green.

As you see, it is plain black.  It is the result of setting all of the pixels with Red, Green and Blue values of zero.

Another obvious interpretation would have been:

WhiteThis is pure white, the color you get when the values of Cyan, Magenta, Yellow and Black are all zero.

Think there's nothing there?  Look again.  It is an image of pure white.  This would be the result of printing an image where all the pixels have a zero value for Cyan, Yellow, Magenta and blacK.  (See note.)

In addition to the "black zero," I also submitted the following as my representation of the number five:

As you can see, there are five posts holding up the roof.  This, to me, is a representation of the NUMBER five, not the NUMERAL "5."  As a definition for the number five, I used "the set of all sets that can be put in one-to-one correspondence with the set consisting of five things."  This is a fairly standard definition for a number.  If I have, for example, a set of five stickers, that set is a subset of the number five.  We could, to demonstrate the one-to-one correspondence, put one sticker on each post.  There would be no leftover stickers and no empty posts.  [A side question, to which I don't know the answer, is the cardinality of the set five.  Clearly, the cardinality of any subset of five is five.  But how many subsets are there in five?  I'm sure the number is infinite, but what kind of infinite?]

Needless to say, neither of my submissions was accepted for the exhibit.  I wonder of the curator(s) even understood why I submitted "five."

I had in mind at the time to submit a photograph representing infinity.  (Yes, infinity is a number--or rather two or more numbers--too.  Keep reading.)  I thought having two mirrors facing each other, exactly aligned, would create the appearance of an infinite regression of images in an infinite regression of mirrors.  The problem I faced, in addition to aligning the mirrors properly, was that the camera would inevitably be right in the center of the image, and I didn't want to do that.  Now, a decade or so later, I think I have solved that problem. so here is my (first "successful") representation of the number infinity: 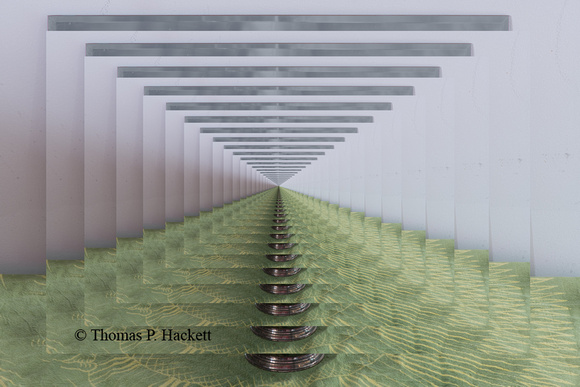 InfinityThis represents the effect of two mirrors facing each other in perfect alignment. For this artist, it represents 0ﭏ (read "alef-null," the zero is supposed to be a subscript), the number of countably infinite things, like the integers.

, aleph being the first letter of the Hebrew alphabet.  This is sometimes referred to as "countable" infinity because, although you cannot count all the mirrors, you can describe or imagine a procedure for counting them even though you'd never finish.  In essence, the definition of countable infinity or aleph-null is the set of all sets that can be put in one-to-one correspondence with the integers (or positive integers, or natural numbers, or anything you can think about counting).
See https://en.wikipedia.org/wiki/Aleph_number for more interesting trivia.

The rational numbers are also a subset of infinity, but not the irrational or real numbers.  The irrationals are a different number, sometimes called beth-one

(R, or simply c in homage to Georg Cantor who, in 1891, proved that not every infinite set can be put in one-to-one correspondence with the natural numbers).

I leave the pictorial representation of R as an exercise.  Needless to say, had I been able to submit this photograph for the exhibition, it would not have been accepted either.

Note:  You may think it odd to have two representations for zero.  I thought so too, until I started working in the data processing industry.  My first job was with a mutual funds and life insurance company that, naturally, owned a computer.  They ran a neat program (not written by me) to calculate commissions for the sales force.  I once worked on a bug, reported by a compulsively honest sales person, which manifested in the following way:  Whenever a sale was made, the commission was calculated by this program and paid to the person who made the sale.  Of course, as with most financial products, the purchaser had a period of time to change his or her mind and ask to have the money returned.  When this happened, the program once again calculated the commission, which should have been deducted from the sales person's pay.  But what this particularly honest sales person noticed was that instead of being deducted from his or her pay, it was being added again.  One might suspect that the less honest sales people were keeping quiet about this and enticing their friends and relatives to buy mutual funds and shortly thereafter cancel the purchase to build up commissions for the sales person. I was given the task of solving this problem.

Without going into too much detail, let's just note that the bug was an artifact of how negative numbers are represented in computers.  The most common representation is called "two's compliment."  If you have a positive number, say three, represented in binary as 00000011 (using, for example, an 8-bit "word" as it were, or "byte"), to form a negative three, you compliment each of the bits--11111100--and then add a 1, giving 11111101.  So now, with an 8-bit byte we can represent 256 numbers, from -128 to +127, and it can be shown that any byte with the left most, or high-order, bit set to 1 is negative.

There is, however, another representation called "one's compliment," which is generated by simply changing all of the 0s to 1s and vice versa.  So, if 0000101 represents five, negative five is simply 11111010.  This gives us the ability to represent -127 to +127--more symmetrical and perhaps easier to implement than two's compliment.  We can still (almost) recognize negative numbers by the 1 in the high-order bit.  But this introduces an anomaly that may have some interesting consequences.  Just like in the case of RGB and CMYK color schemes, there are two possible representations for the number zero:  00000000 and 11111111.  It is as if we had a positive zero and a negative zero.

Here we come to the crux of the problem I was asked to investigate.  The program, for reasons I never went into, did some convoluted calculation, probably on the premium.  If the result was zero, meaning that the premium had been returned to the customer, then the commission was taken away from the sales person.  Otherwise, the sales person received a commission.  Now it happens that the computer in question used one's compliment notation, and (for reasons that are no longer clear to me) the result of calculating a returned premium was often or always negative zero (11111111).  When it came time for the program to decide whether or not the premium was zero, the machine decided that "negative" zero was not the same as "positive" zero.  And since the result was not equal to (positive) zero, the sales person received another commission.  All of this is to some degree just a hypothesis, since I was working in the computer language COBOL, not the native language of the machine.  But when I changed the program to figure the commission by a different method, it behaved correctly, and the scheme of earning a commission for both the sale and the return of a policy or mutual fund shares came to an end.

Alisa Lira(non-registered)
Great article, informative and also instructive.
Anita Hadley(non-registered)
Tom, I find this article to be quite scholarly. I have a Math background, and while I have been out of that loop (teaching Math) for some time now, I still feel it "in my blood." I do very much like your Infinity depiction. And I thank you for sharing.
No comments posted.
Loading...
Subscribe
RSS
Recent Posts
NFT = Not for Tom The Vast Playground of Photoshop Brushes A little excursion into number theory for digital artists On not leaving a mess Is a 2x teleconverter useful? Photo Myths 2: Saturation Photo myths 1: do not use a lens shade Unexpected color cast in print Free software is worth every penny. Note cards and greeting cards
Keywords
saturation Bitcoin Blockchain NFT non-fungible token NP-Complete provenance aleph-null beth-one bit
Archive
January February March April May June July August September October November December
© Thomas P. Hackett